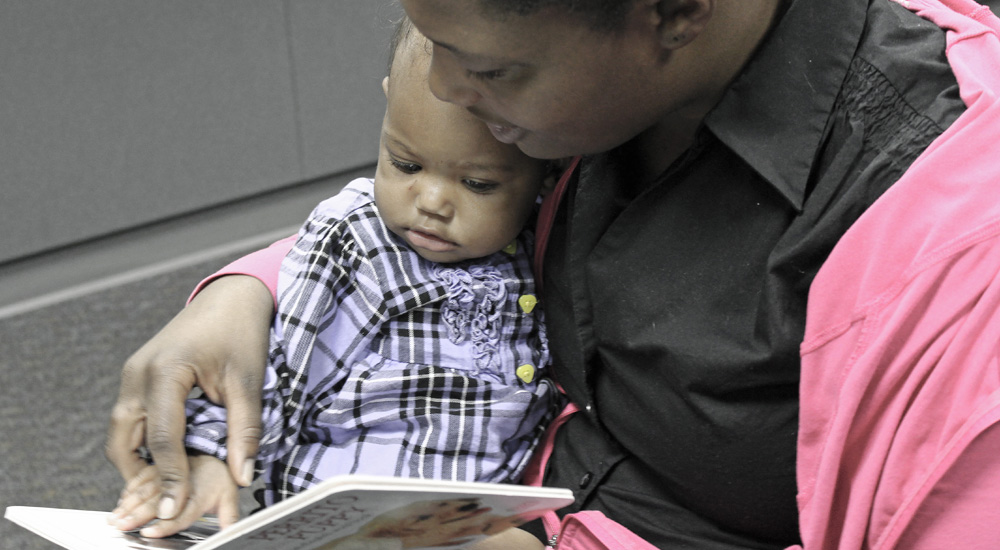 Walking into Turner House Children’s Clinic I wasn’t quite sure what to expect. Was it going to be a mad house with kids running around the waiting room? Or was it going to be completely empty, not a young soul to be seen? As I made my way inside I let out a sigh of relief.  Sitting in chairs throughout the giant waiting room were four families, and sitting at a small table in the middle of the room were two boys, talking and playing with different toys.

I hurried to collect a bunch of books and the red Reach Out and Read apron, marched up to the table, set the books down, and excitedly exclaimed, “who wants to read a book?” At first the boys looked at me like I was crazy, but as soon as I spread the books out on the table they began to eagerly sift through them. The older boy looked around eight or nine, so I picked up a small chapter book and told him how cool it looked and that he should read it to me. A big smile formed on his face as he scooped up the book, opened the first page and began to read. The younger boy who looked to be about seven made his way over to us, and after a few minutes of listening to the older boy read each page, he announced that he also wanted to read. So there both boys sat, switching off line by line, if the younger one needed help the older boy would quickly assist him by sounding out the word.  I must admit, it was an awesome sight to see. Not only were both boys reading but they were excited about what they were reading and willing to help each other out if they needed it. After a few minutes, their names got called to see the doctor, but before they left I made sure to tell them that they were awesome readers, high fiving them on their way out of the room.

As soon as they left, a little girl who looked to be around five slowly made her way over to me. “Do you want to read a book,” I asked. It took her a minute to come sit down but after encouragement from her mom, she came and sat right next to me. I looked at all the books and asked her if she wanted to read one about Christmas. As soon as I said the word Christmas, a smile spread across her face and she nodded her head. I opened the book and began to read. It wasn’t long before the little girl started asking me all sorts of questions and pointing out the different illustrations. I learned so much about this little girl from her favorite color, red, to her favorite animal, dog. It’s like the minute we started reading the book her shyness evaporated into thin air. It’s crazy that one element on a single page of a book can do that to a child. Once we finished the book, I noticed the little girl’s mom observing us from her chair. I told her how sweet her daughter was and her response was ‘thank you for reading with her.”  To many people a simple thank you might not seem like much, but to me it meant that the mom noticed her daughter come to life through something as simple as reading a book. Hopefully after watching our short time together, she too will read with her.

After I said goodbye to the little girl I noticed there weren’t very many people left in the waiting room. As I looked around, I spotted another adorable little girl who couldn’t be more than three years old. What’s better was she already had a book in her hand. So I called over to her and asked if she wanted to read her book. She quickly got out of her chair and ran over to me. As I looked at the book I noticed that it was a Spanish and English book. I don’t know Spanish so I decided to read just the English parts. After reading one of the pages about colors, I asked her what her favorite color was. She said something back to me, and I realized she said it in Spanish. So I asked her a different question, and again she replied in Spanish. I continued to read the book, not knowing if she understood or not, but boy was she alert. She looked at each page, pointed to different things and said something that I could not understand.  So in return, I smiled, nodded, and pointed to a different picture in the book that she would say something in Spanish about. We went on like this through the entire book. It didn’t even matter that there was a language barrier. This little girl was so into the book, smiling and laughing after she said something and nodding and smiling up at me, peering at me with her big brown eyes as I said something. This just proves that a book can do more than help children grow; it can allow two people from different backgrounds to come together and bond over one thing.

By the time the little girl left, I realized it was already the end of the hour. My first time volunteering exceeded my expectations. I may not have learned any of the kids’ names, or spent more than twenty minutes with them, but I did get to see them smile and enjoy the books we read together. That is totally worth it to me.